The Fake Tourist Wave from Turkey to the USA 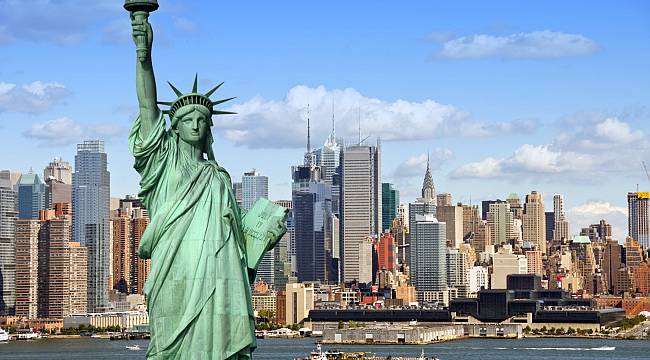 05 Eylül 2022 - 23:06
Public opinion in our country has recently been occupied with the antics of the singer Gülşen.

It’s almost as if the powers that be want to see people's attention consumed by such frivolity.

Unfortunately, the frivolity is enough to capture public attention despite all the daily newsworthy events happening in Turkey.

This being the case...

Rather than becoming consumed by the daily news cycle, lets mix things up and take a moment to focus on an important issue concerning Turkey and the United States.
Yes, our topic du jour: refugees/asylum seekers/immigrants.

Of course, when the topic is refugees...

That’s all fine and dandy Hasan you might say, “but the refugee issue is already on the public’s radar.”  I’m aware that It’s constantly being raised especially by Victory Party Leader Ümit Özdağ.

If you're expecting me to debate the issue of “Syrian Refugees” my dear reader you’re mistaken. Likewise for Afghan, Somalian, Ethiopian, or Iraqi refugees.

These refugees are “Turkish Citizens”

Yes, the other day I received an email from a reader of Turkish origin living in America.
I’m not going to lie, what I read caught my eye so I made contact with the reader to see if I had permission to print the claims made in the aforementioned email.

I was given permission to pass along the readers message on condition that I maintain their anonymity and uphold the principle that “no harm comes to the messenger”.
So, I share the email below.

Dear Hasan Eser,
While there are plenty of social media bombshells in Turkey, I’d like to draw your attention to a different social phenomenon with the explosive potential of a nuclear bomb.
There are no empty seats on planes traveling between Istanbul and Cancun Mexico!
Many of the passengers are young people traveling to Mexio who’ve only received a passport within the last 15 days (with a 90% probability) and who are traveling overseas for the first time.

Most of the passengers come from rural districts and don’t know a second language.
“So what. Doesn’t every citizen have a right to freedom of travel.” you may ask.
Well as the saying goes “appearances may deceive”, I believe that the issue is extremely consequential for Turkey.

Unskilled Turkish youth lured both by the powerful attraction of the American dream and the strength of the dollar are heading for the American border.

I’m of the opinion that an organized gang is facilitating the movement of these people who neither speak a foreign language nor have experience traveling to another country.
These people pass through Istanbul airport without issue (the uninformed may assume that this airport passage is organized!). Upon arrival in Mexico these people enter Mexico legally with the help of a local gang that greases the palms of the Mexican police and provides direction for travel within Mexico.

This is where the first scam of the voyage occurs!

Further, the border police would normally recognize that a person with a particular profile (traveling solo and from a faraway country, never been outside their home country, doesn’t speak a foreign language) is most likely not a tourist.

The Mexican police make no objection to 90% of these individuals using their Turkish passports for the first time.

The local Mexican organization fly's people to Juarez on the Mexico – USA border. The same gang also brings people by taxi from the airport to the shore of the Rio Grande River (knee high during the summer months) on the USA – Mexico border.

People crossing the river on foot are often caught by American border police and being apprehended may apply for asylum. The cost for the trip to this point: $14,000 U.S. dollars.

EVENTS ONCE INSIDE THE USA
American Homeland Security border police (DHS) bring the Turkish citizens to a camp.
After about 50 days the Turkish citizens are given a hearing before a judge and asked to explain the reason for their entrance. Most of the persons claim some form of discrimination be it ethnic or a result of their religious minority status: “In my country there is discrimination, torture, and persecution...”

Of the additional reasons put forward for refugee status; FETÖ membership, atheism and homosexuality are the most frequent.

At this point expert immigration lawyers become involved, the majority of them of Turkish descent and fluent in Turkish. They typically charge between $3,000 and $5,000 dollars.
At every opportunity Turkey’s poor image is emphasized to the judges in order to elicit sympathy and to anticipate objections along the lines of “You acquired a Turkish passport and left unmolested so where was the persecution and oppression”? In many cases there is no qualm against releasing refugee applicants into the general US population due since the economic demand for workers is high.

SPONSOR EXCHANGE
There is another hoop that our people must go through to shorten their time in detention. The most important of these is the sponsor system.

Obtaining refugee status in the USA may sometimes be a year's long process. After a limited period, it is not in anyone's interest to detain people. They are released under condition that they obtain a sponsor.

In summary, the sponsor agrees to provide refugees with a place to sleep as well as three meals a day and guarantees future appearances before the court.

Many of the refugee applicants, especially those Turkish citizens of Kurdish identity coming from feudal circumstances, claim kinship as a basis for sponsorship “I’m their father, an uncle's son, a family friend, or an aunt's nephew”

Of course, there is a fee of about $1,000 dollars to secure a sponsor. No joking but there are actually “serial sponsors” who accept up to 10 persons at a time.

The self-interested cleverness of Anatolian people doesn’t end here. 50% of those released go to Canada and request asylum leaving their US dossier open.

The reason? Canada provides asylum seekers with a monthly stipend.

LIKE A SURREALIST FILM
Even from 500 meters away Turkish citizens are easily spotted, congregated together in groups of 30-40 at the same cheap Texas hotels whilst whiling away time chain-smoking, they seem happy and relieved to be free.

Each one has a dream. Some want to bring their entire families. Some of the youth want to take a shortcut to wealth and conquer the USA. Once underway it’s difficult to stop the momentum of an Anatolian people's migration.

A favorite method of some youth is to find a “Sugar Momma”. In American slang a “Sugar Momma” is a lady with a boring but well-paying profession who possesses the financial means to provide for a young lover. Social media has helped clever youth aware of the option.

THOUGHTS ON THIS SOCIAL PHENOMENON
According to publicly available figures about 40,000 persons entered the USA from Turkey by way of Mexico during 2022. The same number is expected during 2023.

This number of people is a drop in the bucket in comparison to the USA’s 340-million-person population, but is could potentially impact Turkey which has a population only a fraction of America’s.

There are some that will see this as a shameful and forced exodus from Turkey. These are all bogus claims to provide cover for the USA, according to some the root cause is money.
But if we look at the statements of some Turkish citizens of Kurdish origin Turkey is being hit from all sides. Smears of fascism and barbarism against Turkey know no bounds (one might ask if “a person really is capable of making claims this exaggerated”!).  In all honesty, one can’t help feeling that the seeds of a new anti-Turkish lobby are being laid in the United States.

In the past there were the classic Greek and Armenian lobbies (think Biden and Pelosi) and later the Gülenist diaspora was added to this lobby consortium. A person might now ask “Will the new arrivals form the basis for a new Kurdish lobby”? We shall see.

Whatever the outcome over time civil society organizations such as “ATA Washington DC” that attempt to work and raise their voices on behalf of Turks and Turkey should continue to proffer traditional Turkish hospitality to the new arrivals. Turkish civil societies in the USA should welcome the newcomers and work to integrate them into the Turkish community within America. Otherwise, “those that stray may be devoured by the wolves”.